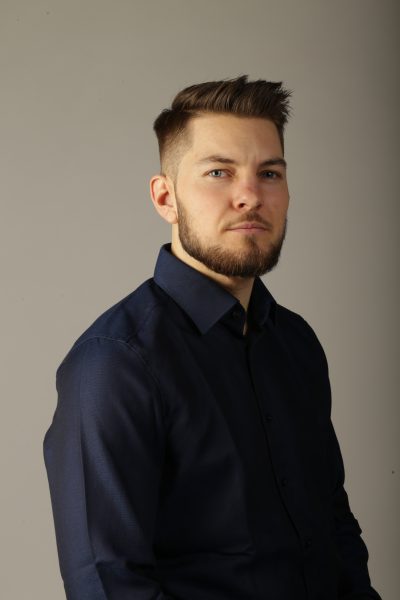 A talk with… Joschua Thuir

Trans*parency at work? Walking the line

A heterosexual male in private, a homosexual woman in the workplace – confused? Meet Joschua – a police officer who felt compelled to lead a double life for five years of his career. This is a story about professional transparency, courage and the need for progress in society and the law.

Joschua Thuir, 27, works as a police officer for the federal police force at Frankfurt Airport, mostly at entry/exit checks. Joschua’s duties also include patrolling the public areas of the terminals. In his free time, Joschua is involved with networks such as Deutsche Gesellschaft für Transidentität und Intersexualität e.V. (dgti) (German Association for Trans Identity and Intersex People), Verband lesbischer und schwuler Polizeibediensteter Deutschland e.V. (VelsPol) (Association of Lesbian and Gay Police Officers in Germany) and the police union Gewerkschaft der Polizei (GdP). Via these networks, he supports victims of homo- or transphobia, shares his experiences and trains colleagues on how to deal with transgender and intersex people in a legally compliant manner.

Why are you so heavily involved in the LGBT*IQ Community?

Joschua Thuir: For several reasons, one of which is my personal history. When I was 19 and still in training, I realised that I could no longer identify with the female gender role assigned to me at birth. However, I didn’t come out as a trans man at work until I was 25, because I feared that it would cost me my career if I disclosed my true identity before becoming a state official with lifetime job security and privileges.

Being a trans person might be an obstacle to becoming a state official?

Joschua Thuir: Indirectly, yes. To join the police force, you have to meet certain health criteria that are laid down in the official police instructions PDV300. You’re checked to see whether you meet these criteria when you’re hired and when your probationary period ends. PDV300 distinguishes between men and women. When I was originally hired – as a woman – I met all the criteria for female officers, but later I didn’t meet the ones for male officers. For example, men must have at least one functioning testis, which is not possible for a trans man according to current medical technology.

So, coming out during my training and probationary period was not an option for me. The exclusion criteria forced me to lead a double life in order to continue my career: for five years, I was a heterosexual man in private, but I went to work as a homosexual woman.

“I constantly feared being revealed as someone who was living a lie.”

Did hiding your true identity like this have an impact on your work?

Joschua Thuir: Absolutely. I constantly feared being revealed as someone who was living a lie. My efforts to pass for a woman also required an incredible amount of organisation, concentration and quick-wittedness. For instance, I had to react to female pronouns, although I didn’t feel that I was being addressed. In addition, there are some gender-specific duties at the police. Two concrete examples: I was regularly required to frisk women because of the relevant formal requirements which only permit frisking by people of the same gender (unless the situation is life-threatening). At passport control, I also frequently compared photographs of women not wearing a veil with women wearing a veil. This occasionally led to misunderstandings because of my rather masculine appearance.

In what other areas do you think your profession comes into contact with issues of gender identity or sexual orientation?

Joschua Thuir: As a police officer, I work with the law. However, our German Basic Law only recognises two genders and states that “Men and women shall have equal rights.” Police forms are thus based on a binary gender norm and are yet to include a third gender option. However, this is set to change by the end of the year, when a third gender is to be enshrined in the law.

A growing number of transgender or intersex people carry a supplemental ID. This ID card can be presented as an additional document in situations where someone is searched or asked for identification. It clarifies the legal situation and the identity of the person. It’s an aid to the police, so to speak. However, this ID card is not yet widely known.

Other points of contact can be found in asylum law. Persecution of homosexual and transgender people has now become a ground for asylum or refugee protection. Under the asylum procedure, these people must provide the Federal Office for Migration and Refugees – which processes and decides on their application – with proof not only of their persecution, but also of their sexual orientation or gender identity. In my day-to-day work, I’ve encountered people who have expressed their wish for asylum to me for these reasons.

What did you experience in your professional environment after coming out as a lesbian?

Joschua Thuir: Actually, I came out several times. When I was in training, I came out as supposedly lesbian and experienced some negative reactions from my fellow trainees. There were some verbal attacks like calling me “butch”, and non-verbal bullying like ridiculing my appearance in the communal showers. I also felt that my supervisors at the time had left me to deal with these day-to-day problems on my own. Once I was certain that I identify as a man, I didn’t open up to anyone in training any more. That’s a time I don’t want to remember. Unfortunately, I didn’t have the courage or strength to go to the next level of authority, nor did I have the relevant information, for example on VelsPol, the LGBT network in the German police, judiciary and customs authorities, to find a different way to ask for help.

“After I came out, colleagues from the continuing education team were very interested in using my expertise.”

And what did you experience when you came out as a trans man?

Joschua Thuir: When I came out as a trans man at the federal police force after those five years I mentioned before, the reactions were a lot more positive. But here, too, a few colleagues proved to be lacking social skills.

The next step must come from those higher up. Unfortunately, my attempts to make this point so far have been in vain. So I have to put up with colleagues who ignore me even if we are on patrol together and should have absolute trust in one another. I had to learn to deal with this.

After I came out, colleagues from the continuing education team were very interested in using my expertise. They asked me and another transgender colleague to prepare a talk for the aviation security training. To do so, I was even sent to Berlin for 2 days.

How did your supervisors react when you came out?

Joschua Thuir: The reactions of my supervisors at the time were very mixed, but by and large they ranged from positive to awkward. I asked a police trainer to disclose my identity to my direct supervisors and to ask them to forward this information to others in the command structures. I chose this approach to give everyone the opportunity to take a look at the German Transsexuals Act so that they could familiarise themselves with the topic before talking to me. Unfortunately, there was still confusion on all sides which couldn’t always be clarified or resolved.

As is so often the case, each individual has an important role to play in such situations. Committed supervisors will not tolerate discrimination. Others are less (pro)active or even shy away from conflict.

“Lastly, I’d like LGBTIQ people not to feel alone either during training or later in their job and I’d like the fear of coming out in this organisation to become a thing of the past.”

What would you like to see in future in terms of the visibility of LGBT*IQ issues in your workplace?

Joschua Thuir: I’d like to see LGBTIQ issues included in vocational training and continuing professional development because incorrect behaviour often stems from ignorance and unease. At the least, police officers should be made aware of exceptions so that when they’re dealing with people who are not heterosexual or cis-gender¹, i.e. 10% of the population, they can also fulfil their duties confidently and in a legally compliant manner.

Additionally, I’d like the federal police force – in accordance with its guiding principles – to take a stand as regards LGBTIQ employees, provide more education on this topic and have the Federal Ministry of the Interior revise PDV 300 such that trans and inter people can no longer be automatically disqualified from service in the police force. Lastly, I’d like LGBTIQ people not to feel alone either during training or later in their job and I’d like the fear of coming out in this organisation to become a thing of the past. To achieve these goals, the federal police force needs to increase the number of designated contact persons and broaden their target group by extending it from LG to LGBTIQ, as has already happened in some state police forces. The role of contact person shouldn’t just be something that is done on the side and doesn’t involve any obligations. It should be used proactively to increase awareness and counter discrimination both within and outside the organisation. Initial steps in the right direction have already been taken – I would be happy to continue this journey together, with the support of our organisation.

¹This term refers to people whose gender identity matches the sex assigned to them when they were born.

A talk with… Ise Bosch