Since the publication of the joint position paper on blood donation in April 2020 with the co-initiator METRO AG and 15 other signatories, PROUT AT WORK has been publicly campaigning for a change in the hemotherapy guideline. Companies bear social responsibility: In this context, many provide premises for blood donation and call on employees to donate blood. An amended guideline will enable companies to offer a non-discriminatory working environment and at the same time fulfill their social responsibility.

On March 24, the Health Committee held a hearing on the topic of blood donation, at which PROUT AT WORK-board member Albert Kehrer was invited as an expert, among others. In the Live Talk he reported on his experiences and Nikita Baranov, Executive Assistant to CHRO at METRO AG picked you up with his impulse lecture on the topic of blood donation. He explained why it is important to advocate for policy change right now and how companies can contribute. Unfortunately, the video is only available in German.

A talk with… Andrea Euenheim

“METRO’s goal is to offer all employees the space to develop as personalities and thus be able to fully exploit their potential.”

In recent years, Metro has developed its own diversity approach, based on the conviction that diversity has a positive impact on business results. How is this contribution noticeable?

Andrea Euenheim: As an international wholesaler we are as colorful as our millions of customers. 169 different nations work for us worldwide. In Germany alone there are 127. This diversity has a very positive effect on problem solving, decision-making and the increased creativity of our employees towards our customers.

You organize events such as the Diversity & Inclusion Days for your staff. How well are such initiatives received?

Andrea Euenheim: We are convinced that we must make the various dimensions of diversity tangible for our employees. The D&I Days help to create visibility and awareness of the issue. The commitment and constructive discussions of our employees in the events show us that the initiatives are right and important.

Andrea Euenheim: METRO’s goal is to offer all employees the space to develop as personalities and thus be able to fully exploit their potential. Our managers act as role models here. They stand for who we want to be. It is therefore very important that they can bring their whole self to work in a very authentic and unprejudiced way – this also includes sexual orientation.

A talk with… Martin Seiler

At first glance, the topic has nothing to do with the workplace, but if you look closely, you will find a labor law perspective. It’s about reducing discrimination against gays, or more specifically, against men who have sex with men. Gay, bisexual men and trans* people currently have to comply with a 12-month deferral period, if they want to donate blood. Specifically, this means that they must suspend their love lives for a year in order to donate much-needed blood. In many other countries, this deferral period is only three or four months. This discrimination led the network’s company to stop blood donations on its own campus in protest of the current deferral period. In addition, the network has campaigned for a change to be made to the underlying legal regulation. On the initiative of the network to be awarded, PROUT AT WORK, together with 12 other companies from German industry, then published the position paper on blood donations on April 17, 2020 and sent it to political and medical decision-makers.
With this initiative, the network to be honored has both challenged internal standards and made a significant impact on society as a whole.

Rising Star Award:
Be You @ Beiersdorf

The network was able to attract 20 active networkers and 200 allies with its launch campaign. Internally, Be You @ Beiersdorf works intensively on diversity workshops and is thus committed to an open culture. One of the network’s greatest achievements this year was certainly the Pride Season campaign: under the hashtag PRIDEINSIDE, the Rainbow Bulli was used locally in Hamburg to raise awareness and educate people on the streets. Nationally, the prominently marketed Rainbow cans of the Group’s best-known brand caused a stir in stores. In addition, the campaign, which grew out of the company’s internal LGBT*IQ network, was linked to an education project. Information flyers were displayed next to each display in the stores, explaining what the company is doing as part of its corporate social responsibility: financial support was provided for Olivia Jones’ ‘Olivia macht Schule’ project, which raises awareness of LGBT*IQ issues in schools.

More information about Be You @Beiersdorf

Founded in the 1990s, it has since been campaigning for LGBT*IQ equal opportunities internally, externally and, above all, internationally. In impressive short reports, for example, it tells the story of the beginnings and progress of LGBT*IQ commitment in the company and also the history of the network itself, together with the BBC. The network is active in 43 countries with 5,000 networkers, shaping LGBT*IQ diversity across the company. Internally, there are educational trainings on LGBT*IQ, the company celebrates its own diversity & inclusion culture and also informs the general workforce about the LGBT*IQ network in order to recruit further committed people. In employee surveys, the company wants to find out directly from LGBT*IQ employees how they feel about their own sense of acceptance and how open the company is about sexual orientation and identity. The company is also visible externally on diversity issues. From commercials on gender biases to LGBT*IQ oriented marketing campaigns, the company cooperates with various LGBT*IQ NGOs to achieve equal opportunities for LGBT*IQ people around the globe. 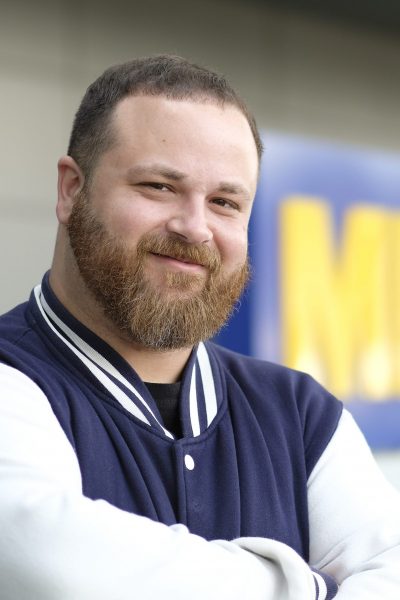 “I want to maintain a daily dialogue about LGBT+ because unconscious bias is something that affects everyone. The more visibility I can give the subject, the more we will become aware of our unconscious thoughts.”

After studying logistics management, Nikita Baranov began his career in the commerce sector and was responsible for external IT partners and innovations at METRO AG from 2015 to 2020. He has been Executive Assistant to the CHRO since July 2020. In addition, as a spokesperson for the LGBT+ employee network METRO Pride and a core member of the women’s network WiT, Nikita promotes cultural change in order to make workplaces even more open.

Why are you involved in this topic at work?

Nikita Baranov: I want anyone who works for us or with us not to have to ask themselves the energy-sapping questions “Should I come out?” and “How much should I reveal about myself?” – I want them to be able to be who they are, with their entire identity. To come to work without having to fear being harassed, bullied or discriminated against just because of who they are. Not only to be diverse and integrated, but also to have a feeling of belonging.

What responses do you get to this?

Nikita Baranov: I get positive responses to my involvement, but I also notice that the topic of LGBT+ is not always considered an integral part of Diversity & Inclusion by all employees. That’s why we need to continually raise people’s awareness because only a diverse workforce can meet our goal of producing creative and innovative solutions for our equally diverse customers.

What can we all achieve by getting involved in LGBT*IQ networks?

Nikita Baranov: I’m convinced that only by joining forces will we manage to eliminate discrimination at work in order to promote equal rights. Networks help us increase visibility, and company-wide projects have a bigger reach and significance. One thing is certain: we’re all fighting for a common cause, and alliances can only be beneficial.

Since July, you have been Executive Assistant to the Chief Human Resources Officer at METRO AG – will this enable you to make LGBT*IQ topics even more visible?

Nikita Baranov: Above all, I firmly believe that, regardless of role or position, everyone has a voice and a platform that they should use to promote LGBT+ topics. As LGBT+ diversity is a key part of our corporate culture, I’m happy to be able to make the topic even more visible.

You’re often seen with a rainbow – what does it mean to you to be out and visible?

Nikita Baranov: I want to maintain a daily dialogue about LGBT+ because unconscious bias is something that affects everyone. The more visibility I can give the subject, the more we will become aware of our unconscious thoughts. Being out at work and not having to hide my identity is a prerequisite for showing myself as a whole person and performing at my best.

The interview was conducted as part of GERMANY’S TOP 100 OUT EXECUTIVES. This list is a joint project with the UHLALA Group and is now available online.

A talk with… Martin Seiler